Help Preserve the AT in Georgia

As a 501(c)(3) Non-Profit Charitable Organization, the Georgia Appalachian Trail Club can accept your financial donation in any amount. Donations of $100 or more may be designated to one or more of the following specific purposes:

Donated amounts of less than $100 will be considered a general donation. Click here to make a donation.

Sport your support when you have a Georgia AT License Plate!

The Appalachian Trail Conservancy (ATC) receives $10 annually for each Georgia specialty A.T. plate purchased or renewed. Since the plate became available in 2013, Georgia license plate holders have raised over $300,000 for ATC.

Apply for Your Georgia A.T. Plate

Apply for your plate by visiting your local Tax Commissioner’s tag office, or by choosing the “Appalachian Trail Conservancy of Georgia” specialty plate when you renew your registration online. In addition to the regular vehicle registration fees, a standard, numerical A.T. license plate costs $35. There is also a one-time manufacturing fee of $25 when you first purchase your tag.

Each year, the ATC uses funds from the sale of Georgia A.T. license plates to provide grants to organizations and individuals who are working to help fulfill the ATC’s mission within the state of Georgia. Since 2014, over $193,000 has been awarded to grant recipients working on a wide variety of A.T.-related projects. Click here for a year-by-year summary of previous grantees and projects that received funding.

Give to the Appalachian Trail in Georgia when you shop online

While the Georgia Appalachian Trail Club does not endorse Amazon, we appreciate their support through the Amazon Smile program. If you shop there please consider using this link. Through this program, the Club will receive a small portion of the proceeds of your shopping. Click here to shop at Amazon and help provide funds to preserve and maintain the Appalachian Trail in Georgia at no additional expense to you.

GATC has received a 2017 Martin Luther King, Jr. Community Service Award from the Rollins School of Public Health and the Goizueta Business School of Emory University. The award ceremony was held in Atlanta at Emory on January 19. Accepting the award was GATC’s current director of Community Outreach Jay Dement. Also in attend 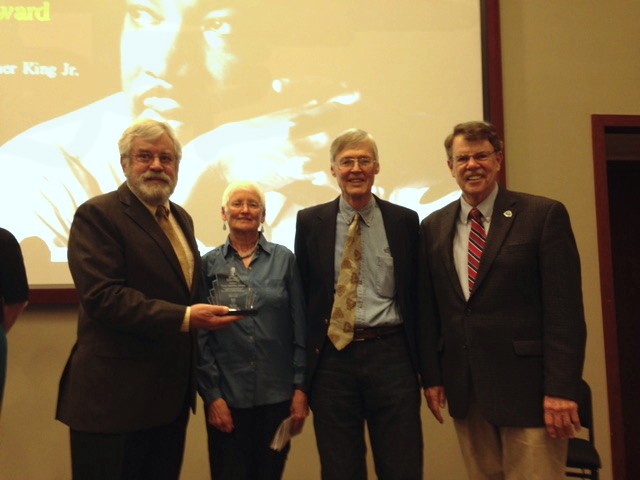 This award recognizes and celebrates people and organizations in greater Atlanta whose work exemplifies the legacy of Dr. King. Some of the criteria for the award specify that recipients should celebrate diversity and impel action in building a better future for all. Additionally, it looks for organizations that invest resources for the well being of all children, especially those who would otherwise miss out on the many opportunities a young life should offer.

The award cites GATC for conducting a youth outreach program over the last ten years that helps young people who might not otherwise have the opportunity to participate in hiking and camping on National Forest lands. The program focuses both on children in areas of concentrated poverty in the metro Atlanta area and on youth in rural north Georgia counties through which the Appalachian Trail passes. Multi-day backpack trips are arranged for the metro Atlanta kids to build their self-reliance and give them a more immersive experience in the outdoors.

The award citation noted that over 25 GATC volunteers have been involved with these outreach activities. GATC thanks all of you who have participated and were instrumental in the club’s receiving this prestigious award. The Club also encourages any other members who are interested to join in this worthwhile outreach effort.

As I start my service as president of the Georgia Appalachian Trail Club, I am reflecting on my time with the club. I joined in 2001, the same year as Frank Wright, and according to a 2001 edition of The Georgia Mountaineer, David Stelts. So, I feel like I’m in good company.

Over the nineteen years in which I have been a member, nothing has given me greater pleasure than trail maintenance.

On my first maintenance work trip, which was as a prospective member, one of the tasks I was given was to help move the existing outhouse at Springer Mountain from the pit it was over to its new location, and then I was asked to dump a bucket of lime into the old hole. That was before moldering privies. I suppose if David Stelts had been on that trip, he would have pushed me aside so that he could have dealt with the outhouse himself. Anyway, that inauspicious start didn’t deter me. I signed up for a few third Saturday work trips after that.

It was in 2003 that I became a section maintainer. Wes Bartlett had run an ad in the Mountaineer looking for someone to partner with him on his section. He sold the idea by stressing that the section started at a parking lot, and that at various times of the year the section boasted beautiful wildflowers. I called him as soon as I saw the ad, and I joined up with him that weekend. That was the beginning of what is now a 16-year love affair with the upkeep of the trail.

Over that period of time, I’ve been a district supervisor and the trails supervisor, but I have to admit, those jobs don’t compare to the satisfaction of just being the guy who cuts the weeds or constructs a dip for water to exit the trail or builds some steps on a steep section.

If one looks at the first few pages of the Yearbook, three key statements are made.

The first statement more or less explains the relationship between the GATC and the Appalachian Trail itself. It says that we are an “association of volunteers who, because of the love of our wilderness areas, have assumed responsibility for maintenance of the trail.”

The second statement spells out our purpose. It begins by saying that “our purpose is to provide for the protection, management and maintenance of the A.T., and its side trails.”

The third statement is embodied in our mission statement. It begins by also stating that “we manage, maintain and protect the A.T.”

So, not only is trail maintenance important to me, but it also turns out it’s at the foundation of why we exist.

In 2021, despite what will be a slow start, it is my hope that we can substantially increase the number of individuals in our club who will take a day or two from their other endeavors to put on old clothes and come out in the woods and help keep our Georgia section of Trail the best maintained state on the entire A.T.

In anticipation of the increase in thru-hiker traffic as a result of the upcoming release of the movie "A Walk in the Woods", ATC has released a series of videos highlighting Leave No Trace (LNT) ethics.  The short (1-2 minute) videos focus on each of the seven LNT principles, as well as the story behind the videos and a blooper/outtake reel.  Spread the word -- "Don't Be That Guy".  #ATLNT

Harpers Ferry, WV (Feb. 9, 2015) – In order to enhance the Appalachian Trail (A.T.) experience for thru-hikers and better manage this natural resource, the Appalachian Trail Conservancy (ATC), in cooperation with its partners, has launched a new voluntary registration system for those attempting to hike the estimated 2,185-mile-long Trail in one year.  This registration system, available at www.appalachiantrail.org/thruhikeregistration, exists to ease impacts from the increased number of hikers expected after the release of two hiking related films, “Wild” and “A Walk in the Woods.”