Voices wafted through the woods as we hiked along the A.T. in North Carolina: “Cheerio box,” said one. “Valspar white latex,” said another (with intensity). “It does not drip.” What were these people talking about? 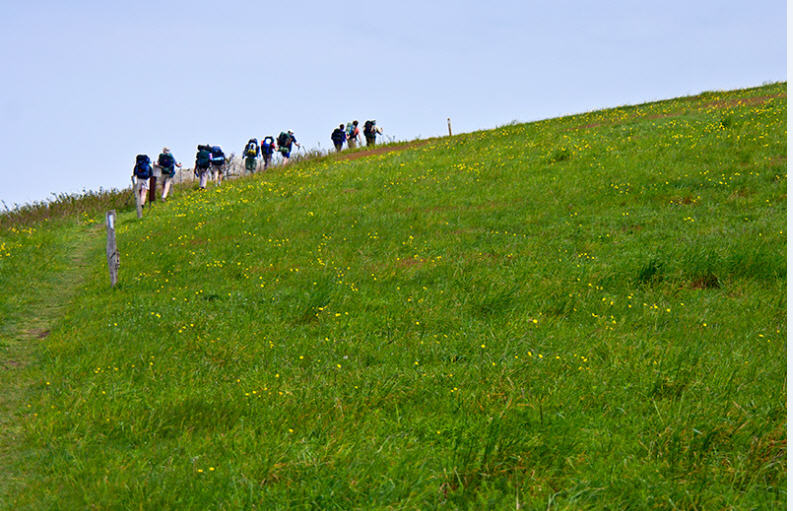 It soon became apparent that the speakers (Trail maintainers and Biennial hike leaders) were not talking about their breakfast preferences or kitchen remodeling—they were debating the pros and cons of blazing techniques and supplies.

Indeed, there are many choices. The Appalachian Trail Design, Construction, and Maintenance handbook suggests the following techniques:
•    Use stencils to apply paint by brush or spray can,(Cheerio boxes are purportedly a great stencil material)
•    Trace the blaze outline through a stencil with a felt tip marker, then fill in the rectangle with a paint brush
•    Use a two- by six-inch stamp made from a sponge
•    Use a straight edge
•    Blaze freehand, gauging the size of each blaze with a cardboard template or marks on a paintbrush

Regardless of how they are painted, there are a lot of white blazes on the Trail—an estimated 165,000 according to the NPS website. 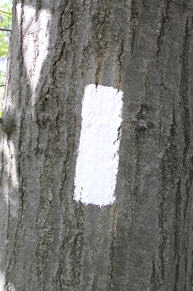 Although the white blaze was adopted as the A.T.’s marking standard by the Appalachian Trail Conference in October of 1979, when and how its use began is less clear. While Connecticut can trace the blue blazes on its trails to blazes painted in 1908 by the Wonalancet Out Door Club in New Hampshire, my research (Internet and inquiries to Brian King and Bob Proudman at ATC) failed to identify who painted the first white blaze or where. Indeed, I got no farther back than Ed Garvey’s recollection (The Register, April 1991) of collaborating with Stan Murray and Dr. Jean Stephenson (who, he says, “had a passion for paint-blazing”) on the 1966 Trail Manual for the Appalachian Trail, which included a chapter on white paint blazes.

Beth Critton is Chair of the ATC Stewardship Council
Reprinted, with permission, from The Register, a publication of the Appalachian Trail Conservancy