Non-native invasive plants, animals, and other organisms can cause harm when introduced to the native plants along the Appalachian Trail. 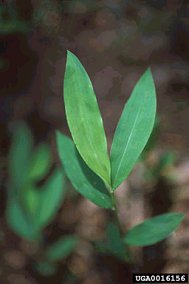 One of the most prolific of these in Georgia is Japanese Grass or stiltgrass (Microstegium vimineum).

Stiltgrass is a dense, mat-forming annual grass that roots at nodes and is shade tolerant. It is found in a variety of habitats including creek banks, floodplains, forest roadsides and trails. Native to temperate and tropical Asia, it was introduced near Knoxville, Tennessee around 1919 and has continued to spread throughout the south. It can be found in almost every section of the Appalachian Trail in Georgia.

It is very prolific with each plant producing 100 to 1,000 seeds that can remain viable in the soil for 3 or more years. It spreads on trails and recreational areas by seeds hitchhiking on hikers’ and visitors’ shoes and clothes. In some ways it resembles crabgrass. It is easy recognizable by its long (2 to 4 inch) leaves with a silver vein running down its middle. It seeds from July to December with seed stalks partially remaining during the winter.

There are two ways to control this invasive. One is to spray it with Accord or Vantage in late summer, Another is to cut it down with sling blades before the seeds mature. In the case of the Appalachian Trail in Georgia, trail workers should use the sling blade method unless under the direction of the U.S. Forest Service.